Ella is still not close to where we need her to be as far as bodily functions.


I called the urologist yesterday and talked to her nurse and told him that we wanted to come in for another appt. and we wanted to go to radiology for a full, more detailed ultrasound of her bladder and kidneys. He told me they couldn't see her for that until her next appoint that was scheduled for the end of January, but after talking to him for awhile he told me that we could be seen at a different location on Dec. 1st. the only problem was that we needed to have an ultrasound done at children's radiology before then to have the results for the appointment on Dec 1st. Once he talked to radiology he told me they could get her in the next day at 8:15am and there was a possibility that after that they may be able to try and see her in urology instead of waiting until the 1st since we would already be there.


Early this morning we headed out to children's here in Oklahoma and had the ultrasound done. When it was finished we called urology to check and see if they could fit us in, after some phone calls they told us they could fit us in at 10:30am. We went to a secluded waiting area and I while we were sitting there Ella's cardiologist called me. I caught him up on everything again and he agrees with me that something is definitely not quite functioning properly in Ella's body. As far as a cardiac standpoint goes she is looking pretty good so he wants us to change a dose on one of her meds and then see a GI (gastrointestinal) doctor as soon as possible before perusing more cardiac testing.


Once we got back to see the urologist she told us that Ella's ultrasound is still showing a major problem with constipation (despite her going everyday sometimes twice a day) and her urine is showing dehydration (despite the 20-40 oz. of water she drinks a day). We have to continue to be aggressive with treating those things. Some of Ella's other symptoms the urologist told us, are not typically side effects of constipation, so we know something else may be playing a role in her not feeling well and losing weight, which is why we need to see GI as soon as possible.


When I was talking to Ella's cardiologist today he told me that we could see a GI doctor here in OK or there in Dallas but to just go to the first available appt. I called Dallas GI and they told me the soonest they could see her was Dec. 30th. We knew we wanted to be seen sooner so we talked to the GI here about scheduling to see if we could get in sooner. They said the soonest date they had would most likely be February... um no...just no. So I called Dallas back to tell them we would take the Dec. 30th date and to ask them to put us on a cancellation list for the possibility of a sooner appointment slot. The man told me that about 30 min before I called they had had some new openings and that they could see her, ...get this,... TOMORROW! I just knew that God's hand was in that and knew it was the power of all the people praying for her today!


So with that said, we will be off early in the morning heading to Dallas to hopefully get some answers or at least closer to finding a way to help our sunshine feel better! We appreciate your prayers more then you will ever know. Please continue to pray for us as we search for answers, please pray for protection from germs, travel safety, wisdom, and strength. We are all a little  lot tired of doctor's offices and appointments but mostly we are tired of not being able to fix our sweet girl's pain. Thank you all for your continued love and support to our family, this road is not easy, it is scary and full of unknowns, but having so many people praying for us is humbling and it makes us thankful beyond words. 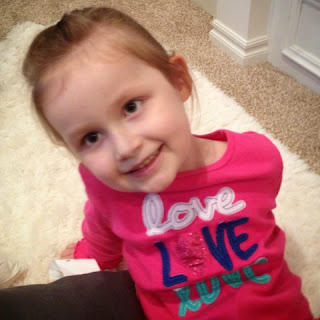