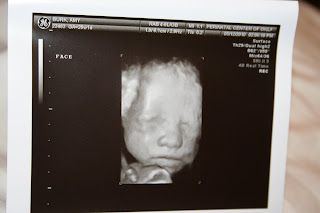 Well I started this blog for updates on Ella, it seems to be the best way just to update everyone at once. First of all I want to thank everyone for there prayers and concern for our family during this very difficult time. I may not always be the one updating here as I will be very occupied as I'm sure you can all understand. But either myself or one of my family members will try to update anytime there is a change. The updates may not be very regular for now since we are only getting to see the Doctors every three weeks, but as July approaches the updates will become more regular. I guess I will start with the most recent update since so many of you know the story up until here. I am 26 weeks pregnant with Ella Dawn, we were told three weeks ago that she had a congenital heart defect called hypoplastic left heart syndrome (HLHS). That means that the lower left chamber of her heart was severely underdeveloped. They told us that with a series of three open heart surgeries called the norewood procedure she would have a good chance of survival, as long as there were no complications or infections. They gave her around a 75% chance of making it through the first surgery. We were so devastated to find out our sweet baby was at such a risk and also that she would have to endure these surgeries over the next three years of her life. Well on May 12th we went in again to have a (somewhat) routine check up, we were going to meet Ella's cardiologist and also meet with the perinatal specialist. We had been praying for a miracle that God would have healed Ella's heart. When they began looking thoroughly at her heart they found that she had a restricted PFO. I am not sure what PFO stands for, but basically it means that the right side of her heart is not working properly. That being the case the cardiologist told us that her chance of making it through the first surgery dropped significantly. He said he would guess around a 20% chance of making it. This condition is so rare they don't have a medical name for it yet. They said that a baby having HLHS is rare but that only 5% of the babies that have HLHS have this condition too. Originally they talked about the option of a heart transplant, this isn't an option now because as soon as she is born they have to immediately do the surgery to make her heart begin beating. She is at some risk inside of me because the blood isn't flowing properly so it is getting thick and causing the arteries to bulge. But there is nothing they can do about that right now. Basically we are waiting to hear back from the cardiologist to let us now some information that we asked for, when we have that information we will decide if we are going to deliver at the OU medical center or if we will be going down to Dallas to deliver. This is extremely rare to have both of these conditions so therefore their isn't many statistics to give. They have only had one of these cases at OU only three in Dallas that my doctor new of and I'm not sure how many in Boston they have done (they have an experimental surgery) but the Boston surgery has not been very successful, the baby at OU died and two out of the three in Dallas died. So odds aren't looking so great. I know that is a lot of information and it might not make any since, sorry about that. It's hard to explain a medical condition when I am just learning it all myself. Right now we are praying for God to heal her heart, we have no idea what the Lord has planned, we are hurting and scared.
Posted by Amy at 9:12 PM 9 comments: